As GPU prices have increased, cryptocurrency miners and gamers have resorted to once-unusual tactics for buying video cards, like paying monthly fees to bot subscription services or paying thousands of dollars on eBay.

It’s always fun to watch the cost of something explode until you can play games calculating whether the street price of various illegal substances is more or less per ounce than your average GPU. The illegal substances are generally still winning, but the skyrocketing price of cryptocurrency has had a similar impact on the cost of video cards. Driving up the cost of video cards has made them rarer and more-desired commodities, which is how we arrive at the point in this story where Hong Kong customs officials are chasing smugglers in speed boats to crack down on illicit GPU sales.

There’s a certain dark hilarity in imagining drug dealers across the world offering their clientele multiple ounces of weed or an RTX 3060, but in this case, the haul consisted of low-end 30HX CMP cards. Nvidia offers a range of CMP cards, with performance ranging from 26MH/s to 86MH/s. We’re hoping they just took the cards *out* of the boxes rather than thinking the entire lot was shipped this way. Seawater exposure is not known to enhance overclocking performance.

We’ve been tracking the peanut-butter-and-clusterf**** sandwich that is the modern GPU (and CMP) market for several months now. There are three reasons why the GPU market looks like it does: cryptocurrency mining, Samsung yields, and pandemic-related semiconductor demand.

At the moment there’s mixed messaging on when semiconductor shortages could ease, depending on which parts you care about. CPU shortages might ease by the back half of the year, but we’re still hearing that GPU shortages could drag on into 2022. Whether they do is going to depend on which factors are starving the market today and whether the companies responsible for them can meaningfully improve the situation in the next few months. If you’re looking for a card, we’ve written a guide to the most affordable GPU options available today. 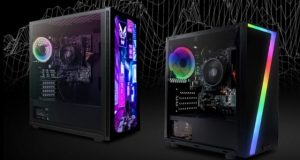